Laminated Glass vs. Tempered Glass: What are the Similarities and Differences? 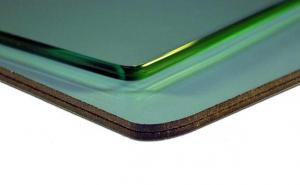 Tempered glass is by far the most common glass used in home construction. One of the apparent differences between laminated glass vs. tempered glass is their physical characteristic. They are both clear and tough glass, but laminated glass is made by fusing two sheets of ordinary annealed safety glass with a thin layer of PVB plastic. A metal mesh screen embedded in the PVB holds the layers together. It’s called laminated because it laminates to the glass.

What is tempered glass, and how does it differ from laminated glass?

Here are some other similarities and differences between tempered glass and laminated glass:

Related Article: All You Need To Know About Laminated Glass

What are the benefits of each type of glass?

The primary purposes of using tempered or laminated glass are protection, safety, and aesthetics. The surface of the glass is made to be stronger than the interior, allowing the exterior part of the glass to take all of the damage in case there is a breakage or shattering of any kind. This means that tempered and laminated glasses are safer and more reliable than regular or standard glass.

Tempered and laminated glass is used in many applications, especially for windows. For example, the windshield of any vehicle is made out of laminated glass. Additionally, skylights and other types of windows may be protected by either tempered or laminated glass.

Tempered glass is much stronger than standard glass, making it resistant to the effects of an impact or physical force. If tempered glass undergoes enough pressure, it will strengthen itself against the applied force.

Which should I use: Tempered or Laminated Glass?

For example, if a child accidentally falls against a window and breaks it, the standard glass may cause grievous harm to the child because it often shatters into many sharp shards. However, if the window was made out of laminated glass instead, it is unlikely that the child would get hurt because it would break into small pieces and not into numerous jagged shards.

Additionally, it is also more difficult to break by forcibly applying pressure to either laminated or tempered windows than standard windows or even other types of glass. Both types of window glass are strong and more resistant to breaking due to their pressure.

Another scenario: suppose an individual is trying to break into a house by breaking through one of the windows. In that case, it will be tough for them to do so with laminated windows because they will not shatter into edge pieces like standard windows.

In choosing between laminated glass vs. tempered glass, you have to remember that glass is a versatile material that can be used for an array of products. The makeup and composition of glass will determine what type it is and its properties and function.

If you’re looking for high-quality tempered safety glass, we, at One Day Glass, offer the best in custom cut and fabricated safety panels to fit your needs precisely with our state-of-the-art machinery. But, of course, we provide steel fabrication services too.